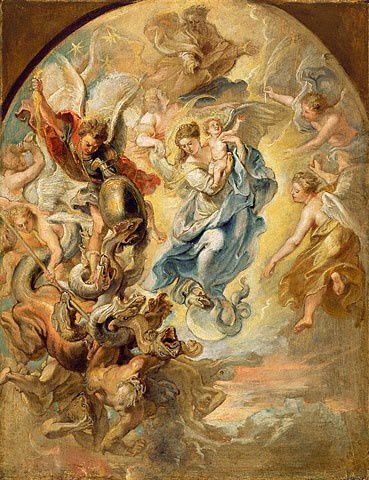 … When I gave birth to Jesus, the devil (the dragon) wanted to kill Him but God the Father protected Him and He also protected Me …

On Friday morning, we woke up and the ground was covered in snow. About an inch of snow had fallen during the night and all was white. By evening most of the snow had melted but there was water everywhere. It surely looked as if winter had started all over again. However, by Sunday the snow will be all gone and we will be back to Spring weather.

The Woman and the Dragon

A great sign appeared in the sky, a woman clothed with the sun, with the moon under her feet, and on her head a crown of twelve stars. She was with child and wailed aloud in pain as she labored to give birth. Then another sign appeared in the sky; it was a huge red dragon, with seven heads and ten horns, and on its head were seven diadems. Its tail swept away a third of the stars in the sky and hurled them down to the earth. Then the dragon stood before the woman about to give birth, to devour her child when she gave birth. She gave birth to a son, a male child, destined to rule all the nations with an iron rod. Her child was caught up to God and his throne. The woman herself fled into the desert where she had a place prepared by God, that there she might be taken care of for twelve hundred and sixty days.

Below you will find the message of Our Blessed Mother given to Father Melvin. She spoke to him these words,

“I bless you My son Melvin and all My sons and daughters who believe in My Son Jesus as your Savior and in Me as your Mother. When I gave birth to Jesus, the devil (the dragon) wanted to kill Him but God the Father protected Him and He also protected Me. The devil was not able to do anything to harm Him or to cause Me any pain or problem.

In this biblical passage I am presented as the greatest woman that ever lived on the earth. I was bright as the sun and I had the moon under My feet and twelve stars on My head. The twelve stars refer to the twelve Apostles of My Son Jesus. It was through the power of the Holy Spirit that I was able to conceive the Son of God who came on earth as the Messiah and who gave His life for the salvation of the people of the world. I was with Him during all the major events of His life. I gave birth to Him in Bethlehem, the city of David. I was present when He died on the cross to pay the price for all your sins. I saw Him too when He was raised from the dead after three days. Now I am with Him in heaven and both of us are in heaven with our bodies and our souls. We have a perfect relationship in heaven as Mother and Son. You know that He has made Me the Mother of all the Christians of the world. I am praying for all of you and I want you all in heaven with Me, your Mother, one day. I love you all.”