We had a little snow two nights ago but it all melted yesterday and in the evening it was beautiful and sunny. Almost all the snow around the house is gone. It melted day after day. I am praying now that the temperature starts going up.

Trial before the Sanhedrin (continued)

When [the members of the Sanhedrin] heard [Peter’s words], they became infuriated and wanted to put [Peter and the other Apostles] to death. But a Pharisee in the Sanhedrin named Gamaliel, a teacher of the law, respected by all the people, stood up, ordered the men to be put outside for a short time, and said to them,

"Fellow Israelites, be careful what you are about to do to these men. Some time ago, Theudas appeared, claiming to be someone important, and about four hundred men joined him, but he was killed, and all those who were loyal to him were disbanded and came to nothing. After him came Judas the Galilean at the time of the census. He also drew people after him, but he too perished and all who were loyal to him were scattered. So now I tell you, have nothing to do with these men, and let them go. For if this endeavor or this activity is of human origin, it will destroy itself. But if it comes from God, you will not be able to destroy them; you may even find yourselves fighting against God."

They were persuaded by him. After recalling the apostles, they had them flogged, ordered them to stop speaking in the name of Jesus, and dismissed them. So they left the presence of the Sanhedrin, rejoicing that they had been found worthy to suffer dishonor for the sake of the name. And all day long, both at the temple and in their homes, they did not stop teaching and proclaiming the Messiah, Jesus.

Below you will find the message of Our Lord, the Son of God, given to Father Melvin. Jesus spoke to him these words,

"If you suffer for My name, do not be afraid My brother Melvin and all My brothers and sisters scattered all over the countries of the world. St. Peter and the Apostles suffered because they were preaching about Me and the court had forbidden them to talk in My Name. So the Apostles were beaten. There are many followers of mine, whether bishops, priests or lay people, who suffered and continue to suffer today because they believe in Me and were not afraid to talk about Me and to write about Me. There are even some today that are martyred like in the early years of the church. 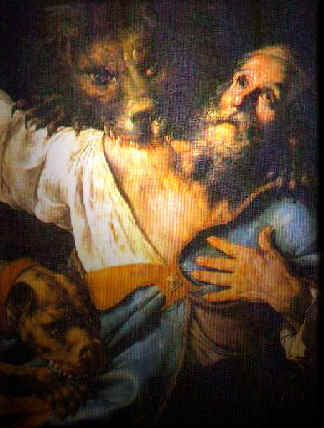 Pray for the Church and for all the followers that their faith be strong and that they will be courageous to preach the truth every day. I bless you all. »